The Heavy Armor Suit is an armor from the Survivability category granted upon purchasing the Extreme VIP. The armor has very high resistances to nearly all forms of damage, but is the slowest armor in the game, and is limited to short-range weapons.

The Heavy Armor is rather bulky and very mechanical in appearance, and it has a grey metallic color scheme, with neon parts (representing team color) around various parts of the armor. The helmet has a rather large neck collar, with an equally sizeable visor. The head is primarily surrounded by an armored collar, and said armored collar has two towing hooks on either side.

The armor also has unusable waist pouches, and what appears to be a jumpjet at the bottom of each boot, which is also unusable.

The Heavy Armor Suit's default health is an incredibly high 2000 HP, but in reality, because of the Extreme VIP's health bonus, the armor actually has 2100 HP, if there are no other health bonuses being applied. The maximum health possible with all VIPs that grant health bonuses is 2250 HP.

The heavy armor suit can also boast some explosive resistance, though its nowhere as high as the Anti-Explode Armor Suit. It can resist 50% of the damage taken from direct hits from most infantry explosives, such as the Rocket Launchers and Grenade Launchers, and 75% of the splash damage taken from infantry explosives, this includes the Self Explode and Remote Bomb utilities. The armor also ha a hidden resistance to Melee Weapons of 40% which makes it harder to be killed by such weapons, even the Frying Pan with its high damage requires a few melee strikes.

Overall, this armor is essentially a walking tank, able to resist at least one hit from nearly any weapon in the game, and shrug off small arms fire with ease.

This means that faster enemies, such as those using the Assassin Armor, can outmanuver someone using the Heavy Armor Suit, and possibly do damage before the player could react.

As resistant as the armor is, the user is not invincible. As such there are some tips when using the Heavy Armor suit:

Being indoors ensures that you won't be shot from far away snipers and vehicles, but be aware of landmines. Even with the high resistances, a couple of landmines can still easily kill you.

It's a good idea to try and seek cover as much as possible, this is so that you would not be overwhelmed by incoming gunfire and also can allow you to heal up any damage you might have taken in a previous firefight,

If you are out in the open, seek cover as soon as possible. This is because being in the open will leave you vulnerable to snipers, and especially ground vehicles as they can easily kill you via roadkill damage, and also because most of your weaponry that your heavy armor allows usage of would not be effective at long range.

While not as easy as it may be, knowing your surroundings can help you survive longer while using the Heavy Armor Suit. It is a good idea to know where players would spawn, and the entry points one may enter from, as to prevent a possible sneak attack from them, which could either result in your death or losing most of your health.

If you really need to walk on foot across the map (or to a facility) in the open, it is best that you stay close to your team's vehicles. They can act as a shield as you make your way to your destination. This tactic is rarely done, especially in public servers, as players will mostly ignore you, and the most coordination you can get on your average BW server is your team defending their spawn from the occasional bored skilled player.. Still, in a coordinated team, they can provide ground protection for you as you make your way forward.

Don't be afraid to use explosives

Due to your resistance to explosives, you can afford to fire a rocket launcher or grenade launcher to kill a pesky assassin armor user through splash damage upclose. Though given the fact most players would keep their distance, this tactic only works best should they resort to melee.

NOTE: This is assuming the user has all the health bonuses granted from various VIPs

Due to the high resistances of the Heavy Armor suit, regular weapons are not as effective as taking out a heavy, even with headshots. There have been several weapons and tactics that are effective at taking out users wearing the armor which are listed as such:

Anti-Materiel Rifles are specifically designed to counter heavy armor users, given their high damage and their separate damage type being resisted less by heavy armor. The only two Anti-Materiel Rifles ingame are the DSR-50 and the BW Rifle-X. Both weapons can kill a player with Heavy Armor with two headshots at almost any range, with the DSR-50 needing up to three headshots at the furthest of ranges.

Keep in mind that both weapons are rather slow to fire, and the problem with the DSR-50 only having three bullets in the magazine. Regardless of these flaws, due to their unique damage type being effective against heavy armor, they are the best weapons to use against a Heavy Armor user.

The BW Devastator is an incredibly powerful rocket launcher that can put a quick end to a Heavy Armor user. While it shares the same two shots to kill along with all but the Uber Rocket and Deployable Rocket Launcher, its drastically faster reload speed allows one to take out a Heavy Armor user faster and have a better chance of killing the target. Also, thanks to its high damage, it can finish off a damaged Heavy Armor user easily.

Crossbows are weapons that are supposed to be somewhat of a novelty category. They do a surprising amount of damage to Heavy Armor if using explosive bolts, and they deal double the damage towards Heavy Armor, making headshots effective against them. Thanks to their single-shot nature and slow velocity, one would need to get rather close to have a chance of taking out a Heavy Armor user.

This does not apply to the standard bolts.

Arguably, the most effective way to counter a Heavy Armor user by yourself is by using two or more particular weapons in quick succession. This includes shooting them with a Rifle-X to the body, then quickly firing the BW Devastator at them, or by spamming three DSR-50s in quick succession. If done correctly, the Heavy Armor user will be killed. This, however, requires a great deal of accuracy, 2 main weapon slots to spare, and is a rather difficult task. A substitute for players that are less experienced and do not have access to anti materiel guns is using the RPG-7 to directly hit the armor and a follow up headshot from an M40A3.

This would be useful if your average BW player read chat and knew how to do basic coordination/teamwork, as on paper, having one guy distract the heavy armor user while one or more other guys use AMRs/rockets/etc to kill the heavy armor user might not seem that hard, but since even two people doing minor teamwork is an extremely rare sight ingame, this barely happens.

Heavy Armor is slow, and they will need to get it to the combat zone with a vehicle for if they intend on quickly entering a combat zone, or spawning an aircraft to use for insertion.. If they're using an ATV or Jeep, use rocket launchers or the NMRG to force them to bail, or kill them before they can get out. If they bail, use long-range and anti-tank weapons to kill them before they get in close enough to be a threat.

Despite the resistances of the Heavy Armor making a lot of infantry weapons weak against it, vehicles still can do a substantial amount of damage, especially the Vortex or Tracker, due to their high rates of fire for their primary weapons, and while not a vehicle in a sense, the Anti-Personell Turret can shred a Heavy Armor user in seconds. However, given that the most common areas a Heavy Armor user would be in are indoors, vehicles have limited use against them, unless you get a good position regarding windows.

Vehicle ramming does full damage to Heavy Armor, since even heavy armor has no resistances to ramming damage, and this also makes the ATV a surprisingly decent weapon against a Heavy Armor user in enclosed spaces, by ramming them at high speeds. Given the low armor and health of the ATV, this is a rather ill-advised tactic unless you have turbo and the armor user has their back turned. 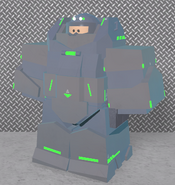 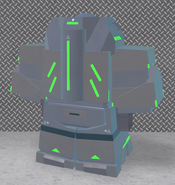 Overall back view of the Heavy Armor Suit

A yellow Heavy Armor user on an ATV 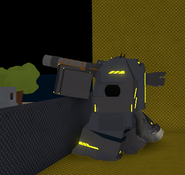 A yellow Heavy Armor user aiming the BW RL-2 at a distant vehicle.

A green Shielded Armor Suit user with an MG42 in a firefight with a blue Heavy Armor user with a M134.

The first person visor view of the Heavy Armor Suit.
Add a photo to this gallery

Retrieved from "https://base-wars-the-land.fandom.com/wiki/Heavy_Armor_Suit?oldid=2392"
Community content is available under CC-BY-SA unless otherwise noted.